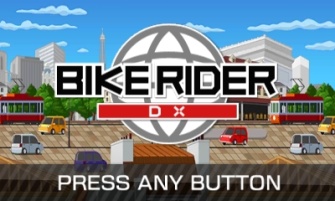 What is "Bike Rider DX?"

"Bike Rider DX" has been downloaded more than a million times on smartphones after its release in March 2012, reaching a massive number of more than 600 million plays in its first three months on the market.

Finally, in December 2012, "Bike Rider DX" was released in Japan for the Nintendo 3DS™ system as a download-only title and managed to rank in 1st in the total download ranking in the Nintendo eShop.

Nintendo 3DS is a trademark of Nintendo. © 2011 Nintendo.